When the astronomer Galileo Galilei first set his sights on Jupiter through his telescope in 1610, he noticed two strange things: First, there four small moons orbiting the planet, and second, planet had these strange alternating bands of color. Now, over 400 years later, we’re looking at these stripes on the Solar System’s largest planet in a way we never have before.

Fast forward to the year 2011: NASA has launched the Juno spacecraft (who’s name has a strange origin story) towards Jupiter, and after a lengthy four-year trek, it finally began its orbit of the gaseous planet. The Juno mission’s overarching goal is to understand how Jupiter formed, which could tell us about the enigmatic origins of our solar system. Equipped with a magnetometer, an energetic particle detector, a UV spectrograph, and a host of other analytical devices, Juno is transmitting a boatload (or spaceshipload if you will) of data back to earth. With that data, scientists aim to unlock the secrets of this massive, swirling ball of gas.

Until Juno, scientists weren’t sure what lies below its impressionist painting-like surface. We’re still not even sure if it has a solid core. In 2016, using radio signals that mapped the distribution of mass in Jupiter’s atmosphere, Juno found that below a depth of 3,000 km (4% of Jupiter’s diameter), the winds just stop.

Now, scientists have come up with a new reason why.

If you were to look through a sea of 3rd grade paper mache planets, you’d be able to spot Jupiter at once regardless of their student’s artistic ability. It's the big stripey one. These stripes are called zonal winds, and we actually have them on earth too. On Earth, however, we also have tall mountains and deep valleys, and this complicated topography makes our winds look more like a demolition derby, compared to Jupiter’s regimented wind traffic. The zones and belts on Jupiter form differences in its atmosphere’s temperature and chemical composition, where hot material is rising, and cold material is falling. Through the coriolis effect, these bands alternate their deflection in the eastward or westward directions.

What makes Jupiter’s winds different from earth’s is that they’re not actually a gas, they’re an exotic fourth state of matter called plasma. Plasmas are ionized gases, meaning they conduct electricity and are strongly affected by magnetic fields.

“Most of the universe is in a plasma,” said Jeffrey Parker, a scientist at the Lawrence Livermore National Laboratory and one of the authors on the study, “so to understand the universe, it makes sense to start with the plasma”. 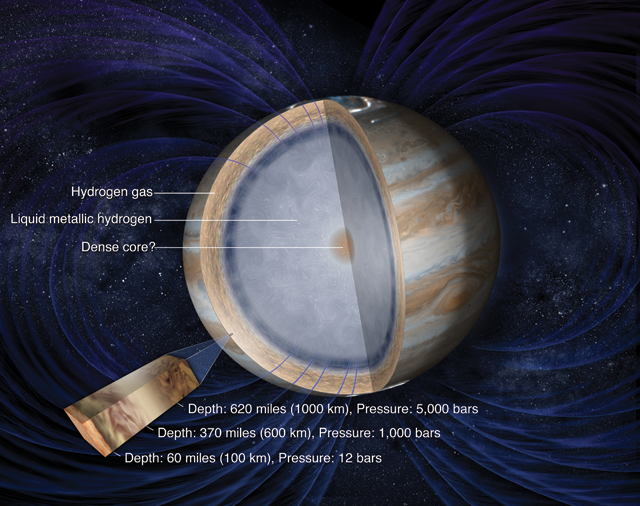 While plasmas are rare on earth, they actually make up about 99.9% of the universe. What makes these materials so complex is that like our terrestrial atmosphere they follow the laws of fluid dynamics, but they’re also being strongly affected by the magnetic field.

When Jeffery Parker stumbled across an article about Juno’s wind discovery, he was instantly curious. See, Parker had done his Ph.D. research on plasma physics, specifically studying at how large scale turbulent flows can organize into patterns...patterns not unlike those on Jupiter.

Researchers had previously hypothesized this wind phenomenon is related to the planet’s magnetic fields because as you travel further and further inside Jupiter, the pressure increases and the plasma is more ionized. The increased ionization correlates with the lack of wind, but until now, scientists weren’t totally sure why. 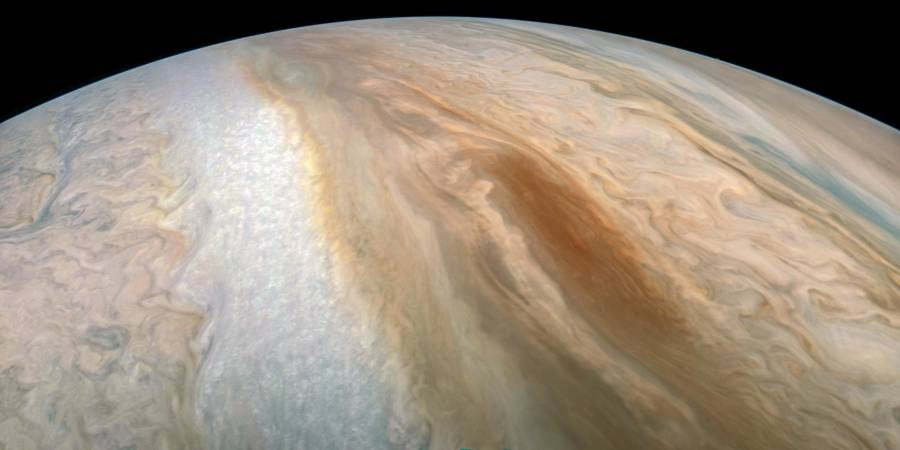 One theory that’s been considered is that differing electrical conductivities create a drag force on the zonal winds, acting kind of like a break at this depth, but Parker and his colleague Navid Constantinou from the Australian National University suggest another way.

To understand magnetohydrodynamics, picture a flowing river. If all the water in the river was flowing in the same direction, we would call that flow “laminar”. Rivers rarely do that. Often, rivers flow turbulently, where the mean direction of flow is downstream, but individual atoms of water are swirling chaotically, sometimes even traveling in the reverse direction. When a fluid travels in the opposite direction of flow, this is called an eddy.


Since Jupiter’s atmosphere is made of plasma, forces from the planet’s magnetic field strongly influence how the fluid moves, making our river model a bit more complicated. Differences in the speed of rotation at different depths in Jupiter’s atmosphere can locally bend and distort its magnetic field, creating what the authors call a “magnetic eddy”. On Jupiter, this eddy could make the lower atmosphere more viscous, behaving more like a cup of honey, as opposed to a cup of water. According to their calculations, these magnetic forces could be strong enough to act as a break, stopping winds at lower depths in its atmosphere.

This doesn’t necessarily mean that magnetic viscosities are solely responsible for what's going on with Jupiter’s winds–right now it’s just an idea–but it does mean gas giants are more complicated than we think.

“The concept of magnetic eddy viscosity discussed in the paper is fascinating,” wrote Yash Sarkango, a space physicist and Ph.D. candidate at the University of Michigan, “It would be interesting to see if there are relevant plasma regimes elsewhere in the space environment where this phenomenon may play an important role.”

Data from NASA’s Cassini mission to Saturn could reveal a similar process. In the future, this concept could be used to study gas giants in our Solar System, and throughout the Universe, so hold onto your hat, because it is about to get windy.


-Lissie Connors (@LissieOfficial) is a graduate student at the University of Oregon, and at Physics Buzz, she covers anything from plasmas on Jupiter, to the nexus of nuclear physics and mayonnaise.
Posted by Rose Villatoro